Scenarios let you have many variations of a single model – for example you may have a construction site where different activities are permitted in core hours, at weekends and at nights. * 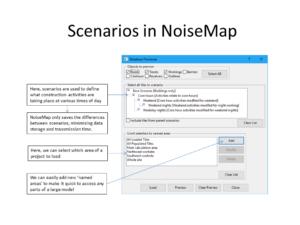 The Database Previewer (shown above) lets you see your Scenario tree structure and download scenarios as required.  The Scenario Manager lets you view and manage the properties of the scenarios, which may be needed as your model grows in size and complexity. You can have as many scenarios as you want. NoiseMap only stores the differences between a new (child) scenario and the previous (parent) scenario.  The rest of the model is inherited from the parent.

* For construction sites, you may also want to assess the noise levels in each week or month of the project, again for different times of day.  NoiseMap has a further tool, known as Categories and Combinations, for dealing with this.

Mapping the way to a quieter future