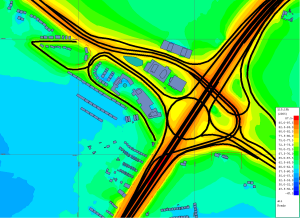 NoiseMap models and calculates road traffic noise using a method called ‘Calculation of Road Traffic Noise’ (CRTN).  It was originally published in 1975 and was updated in 1988. Further refinements have been devised since then and these have also been incorporated into NoiseMap.

CRTN calculates noise levels in terms of the LA10 index. This index has been largely superseded by the Equivalent Continuous Sound Level (LAeq).  Fortunately, at locations alongside roads, these two indexes are highly correlated, which means that it is possible to predict the LAeq level from the LA10 level with a high level of certainty.

The UK government has published a procedure that allows LA10 (18-hour) levels to be converted into Lden and Lnight values.  Because motorways carry a higher proportion of traffic at night compared with other roads, the conversion factors for motorways are different from the conversion factors for other roads.  NoiseMap also lets you calculate the noise levels for each hour of the day and to combine these to obtain averages over various time periods.  This is particularly useful for ‘managed motorways’ where lane control is used to maximise the efficiency of the road, thus meaning that flows may deviate from the typical daily pattern.

This procedure gives the LA10 value, which can then be converted to Lday, Levening, Lnight or Lden values using procedures published by the Government.

Mapping the way to a quieter future